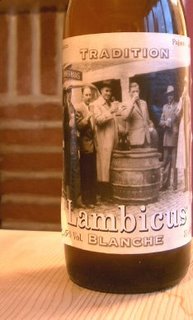 I’ll admit I bought this beer purely based on its label. I have done that before, so as such not a new move. The label portrays brewers from the 1900s in front of the Timmermans Brewery. The Timmermans Brewery dates back to 1781 and it remains one of he few breweries in Belgium which still brews Lambic beers.
The Timmermans Lambicus Blanche is a blonde beer, quite fruity and light, probably a very refreshing summer drink (beer) at 4.5%. Again you don’t even want to know how many beers the Lambicus Blanche brought with it in my endless count of Belgian Beers. It seems Timmermans Lambicus Blanche has a series of siblings: the Dominus Double and Tripel, the Bourgogne des Flandres, the Branbant series – the Pils de Brabant, the Blanche de Brabant, and the Rousse de Brabant. And then the Timmermans line, counting nine (!!!) different beers. Have faith Andreea, have faith. At one point the journey will end :)
So the nine other Timmermans are: Gueuze Caveau Lambic Tradition; Gueuze Lambic Tradition; Faro Lambic Tradition; Kriek Lambic Tradition; and the fruit Timmermans - the Kriek, the Peche, the Framboise, and the Agrum (that’s a new one, go figure!).
No recipe.
Posted by Andreea at 3/24/2006

I never realized Timmermans had that many products. Talk about having your work cut out for you!

have you tried timmermans kriek? i thought it had a metallic taste.
i prefer lindemans, myself!

First of all great congratz for you blog.It's hard nowadays to keep our passion alive. Secondly I would like to add that my last news about Timmerman's is that it have been bought by John Martin, is that true.

Last but not leastin my opinion lambic style is a really good type of beer we should protect.Unique in the world and wrapped with the magic fact of the spontaneous fermentation.A great one.
By the way you can find my beersite at www.motorchela.blogspot.com You would be most welcome.

Congratulations again, cheers and a toast for you.