Belgian Beer no.34: Zinnebir, and the carnival 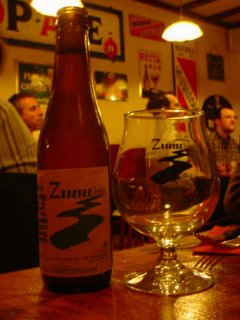 This is how complicated it can get in Belgium with the beers: they invent and brew a different beer just for a special occasion. Like the 12th edition of Zinneke, a carnival in Brussels. I mean hello?!
Zinnebir is brewed since 2002 due to the above reasons. Brewed in Sint Pieters Leeuw, Zinnebir is a relatively weak beer at 6% - all this of course when compared with the ‘usual’ Belgian beer. A quite bitter beer.
The brewery also produces the Christmas Zinnebir, which is only sold between 15 November and 31 December.
No recipe.
Posted by Andreea at 3/18/2006

We organize an open door day at the brewery on april 29th.
Be welcome, you'll discover more about us!