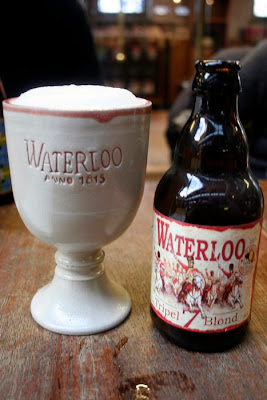 A blond beer we tried recently, the Waterloo Tripel Blond. At 7% quite a strong afternoon beer. The glass was pretty cool though (unusual and not ensured!) - the beer slightly bitter, but smooth and round with a generous head.
Brewed by the Brasserie du Bocq.
(Still going through my archives)
Posted by Andreea at 2/27/2008 No comments: 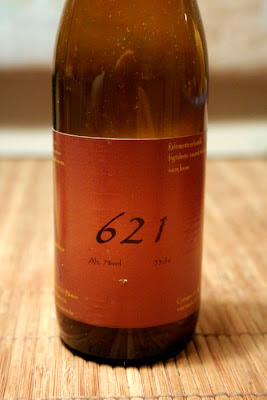 This was a very unusual beer. Never seen it before, nor did we hear about the brewery - Brasserie Authentique. The 621.
A very dark, malt beer, quite bitter and at 7.5% a very interesting beer.
I think a visit to this particular brewery will be in order soon as they seem to have quite a few beers we have never seen.
(Again, one of the archive beers.)
Posted by Andreea at 2/22/2008 1 comment: 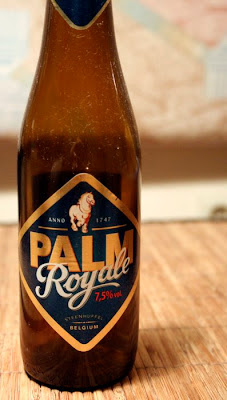 And we're back!
First one up this year (194 in the total count of Belgian Beers tried so far) the Palm Royale. The beer is obviously tried last year - I have quite a few in my archives I need to go through - and a classic one on top.
The Palm Royale, is a 7.5% blond beer. Quite nice, pleasant beer. Nothing too unusual. Brewed by the Palm Brewery.
Posted by Andreea at 2/22/2008 No comments:

Currently I am pretty busy with my non-beer-blogging life so apologies for the sudden silence. Any guest bloggers ready to review some Belgian Beers?
In the meantime, The Guardian wrote an interesting piece on Brussels Beer Bars. Some classics (Monk) made it to the list. Others, surprisingly, not. Do you agree with the top 10 selection? What are your favorite beers bars in Brussels?
Posted by Andreea at 2/20/2008 2 comments: 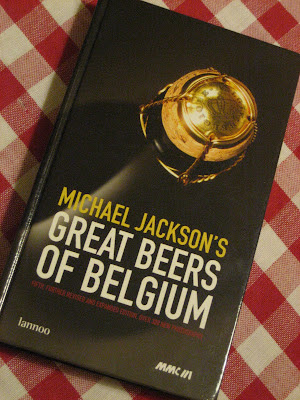 To kick-start this year's Belgian Beers, a first book review by A Brussels Nostalgic.
Text and Photo: ABN
Website/blog:
Why does Belgium, of all countries in the world, have such a vast and high quality beer industry and culture? How come so many of Belgium’s beers have monastic origins? Where, if not in Belgium, would kids sometimes get light table beer for lunch? You’ll find the answer to these and many more issues revolving around Belgian beer in Michael Jackson’s Great Beers of Belgium, a fantastic book which has been in print since 1991 and in 2006 came out with a brand new look together with lots of new pictures and updates.
For those of you who don’t know, Michael Jackson (no relation with the other guy) was probably the world’s best beer critic. He recently passed away on August 30th 2007, leaving behind several books on beer, but also whiskey, and lots of fans of his Beer Hunter tv series. He won countless awards and was always highly regarded by brewers worldwide, particularly in Belgium, who often invited him to tastings. The book is a tribute to Belgian beers, which, it is said, were his favorite.
While reading it, you quickly grasp the idea that Belgian Beer is all about culture, tradition, craftsmanship, history and geography, all of which, combined, bring a product of very high quality. Structured around 22 different chapters, Jackson’s book covers the whole spectrum of beermaking in this country, from the growing of grain and hops, as well as the importance of water and yeast, to a review of more than 300 different beers classified by type, among which you will of course find pils, white, red, brown, fruit, abbey, Trappist but also saison and brut as well as some other interesting categories I presume he coined himself such as “wicked beers”or “passionate pints”. The last two chapters include a long list of addresses of shops, cafes, restaurants and inns around the world that serve Belgian beer.
The book is not intended to be a comprehensive review of all beers in Belgium, like the book by Hilde Deweer All Belgian Beers reviewed earlier in this blog, but covers nevertheless a very wide range of different beers as to get a great idea of the variety and art of Belgian beer brewing.
It is a very interesting work that often makes you think you are reading a travel guide of Belgium rather than a book on beers. His experience, authority, popularity among Belgian brewers and knowledge of the country’s history and geography radiate throughout the pages.
A definite must for anyone who loves not only Belgian beers, but Belgium itself as well.
Michael Jackson’s Great Beers of Belgium – available at www.lannoo.com
Posted by Andreea at 2/04/2008 2 comments: