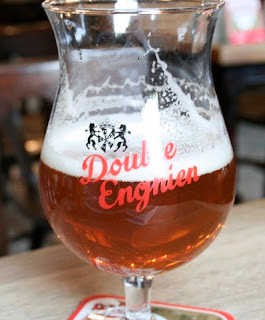 At the same brewery as the previous 123 and 124, this is the Double Enghien. Not sure anymore how it tasted, but as every other Belgian beer worth a try.
Tagged with:Beer Belgian Beer Bier Biere Belgium 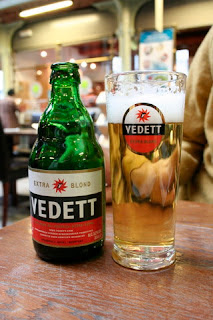 The same for the Vedett, which was Belgian Beer no. 28. Now with the glass though as well.
Posted by Andreea at 3/19/2007 No comments: 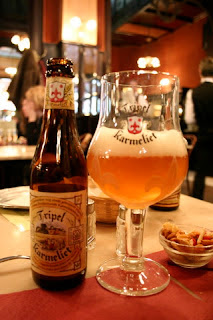 Just another photo take of the Belgian Beer no. 9 - the Tripel Karmeliet.
Posted by Andreea at 3/19/2007 No comments: 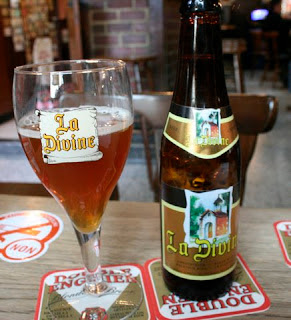 Still at the Brasserie de Silly. Introducing my favortie from the Silly beers we tried, La Divine - the divine. I won't deny it, this beer was strong 9.5%, but absolutely pleasant.
An amber beer, it had a hopy, I would even say wooden and smoky taste. A very nice beer. Any ideas where I can find it in Brussels?
Tagged with:Beer Belgian Beer Bier Biere Belgium
Posted by Andreea at 3/06/2007 4 comments: 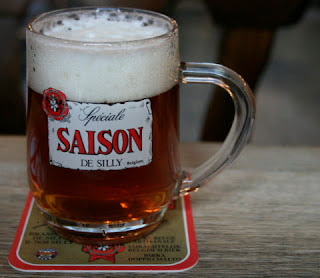 Our initial aim was to visit the Brasserie de Silly (isn't this a great name?) but the brewery was closed. So what did we do? Go to the brewery bar and try all the beers they had from the Brasserie de Silly.
First one up the Silly Saison. A brown beer, light at 5% and quite flavored. Fruity I'd say.
Tagged with:Beer Belgian Beer Bier Biere Belgium
Posted by Andreea at 3/05/2007 3 comments:

The very first guest review. Seems my cry for help was heard by Belgian beer lovers, so without further ado ...
Text and photo: Stonch, a Londoner and a beer lover
Website/ blog: Stonch's Beer Blog
About the beer: Liefmans Goudenband is a current favourite. It's a

Flemish brown ale that is fantasically drinkable but pretty dangerous at 8% ABV. The bottle conditioning allows the beer to mature and evolve if laid down in a cellar. The same brewery is perhaps more famous for its fruit beers, and in particular their Kriekbier, which is quite possibly Belgium's finest. Unusually, Liefmans base their fruity offerings not on a lambic or witbier base, but instead on a mature brown ale. This base beer is sold as Goudenband.
Having tried the beer at various ages, it seems to peak at about five years old, although it'd be interesting to see what happens to this complex and satisfying ale after decades in the bottle.
This beautiful brewery in Oudenaarde, East Flanders was, from the mid-70s to the mid-80s, owned by solid (but rather less glamorous) Sunderland brewer Vaux.
Tagged with:Beer Belgian Beer Bier Biere Belgium
Posted by Andreea at 3/01/2007 No comments: