Belgian Beer no.35: Gouden Carolus, and the Belgian flag 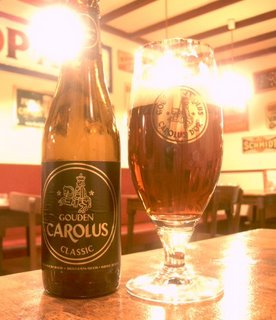 Now this I like. Yet again though, any reason to brew beer in Belgium will do! Het Anker is brewing beers following the colours of the Belgian flag stating that it’s ‘Great to Beer a Belgian’.
There is the first one, Gouden Carolus Classic (the one I tried), a deep dark beer, at 8.5%, and colour no. 1: black. Then there is the Gouden Carolus Trippel, you guessed it – a deep blonde beer, at 9%, colour no. 2: yellow. And finally the Gouden Carolus Ambrio, as the name says it of an amber colour, at 8%, and with colour no. 3: red, the last one. And voila, you have the Belgian flag.
The brewery’s surprises don’t stop here. Once a year, on the 24th of February, birthday of the Charles V, the Cuvee van de Kaizer 11% is produced in limited quantities (didn’t know this one, might give it a go next year).
Further, there is the Gouden Carolus Christmas and Easter beer, the Anker-bok and Anker-blond, the Blusser and three types of Ankerbeers.
Now why did I ever think trying out all the Belgian beers might be a good idea?!
No recipe, but the brewery is also producing chocolate with the Gouden Carolus beer.
Posted by Andreea at 3/18/2006

My dad gave me a case of the Cuvee van de Kaizer in 2004 for my birthday. I finished off the last bottle about 2 months ago. It's great stuff, SUPER malty, and way over the top. I can highly recommmend the King's brew.

It kinda reminded me of a cross between a supercharged Westmalle dubbel, and the westvleteren 12. High octane stuff.