Session 10 and Belgian Beer no.193: Plaizierke by Gordon Xmas 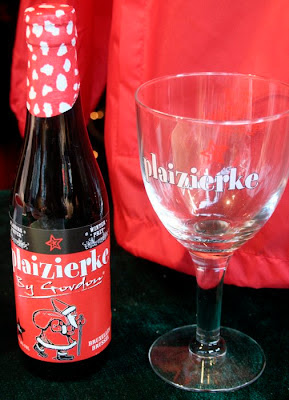 I thought this might be a good 'session' to introduce the official 2007 Christmas Market beer. And to celebrate almost 200 Belgian Beers.
This year's beer seems to be sponsored by Gordon. Last year the official Christmas Market beer was a Delirium Christmas, this year it is a Gordon's Xmas. As long as everyone is happy. Why I chose it? Well, because it is this year's official beer, and everyone going to the Christmas Market in Brussels will come across it. This and a very interesting mulled Kriek. Which I admit I didn't have the guts to try (Kriek. And mulled?)
There is very little else to say except that the Plaizierke 2007 is not as strong as Christmas beers usually tend to be. 8.8%. Enjoy it if you come across it.
Probably also a good moment to wish you all a Merry Christmas and a Happy New Year from www.belgian-beers.eu We will be spending winter down south (Brazil to be exact) so Belgian Beers will resume in January 2008. Thank you all for reading and contributing to Belgian Beers. Here is to 200 more :) At least!
Posted by Andreea at 12/07/2007 8 comments:

Email ThisBlogThis!Share to TwitterShare to FacebookShare to Pinterest
Labels: Session 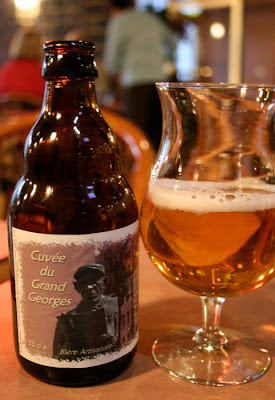 I remember where we had this beer ... but not much else about it. Again an alias for a 'traditional' beer. Brewed for the Grand Georges (a brasserie in the south of Belgium), here the Cuvee du Grand Georges.
Posted by Andreea at 12/04/2007 No comments: 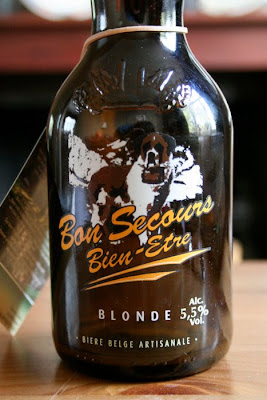 I simply had to buy and try this one. Apparently a 'diet' beer with no sugar added. The Bon Secours Bien Etre (which sort of means 'feel good')
The beer is brewed with the diet/health (and diabetics) conscientious in mind. No added sugar. Hm. A little skeptical on this beer at first, but you know what? I really enjoyed it. Because of the lack of sugar it is a very clear and crisp, clean blonde. Really pleasant. And pretty light at 5.5%. Brewed by the Brasserie Caulier.
Posted by Andreea at 12/04/2007 No comments: 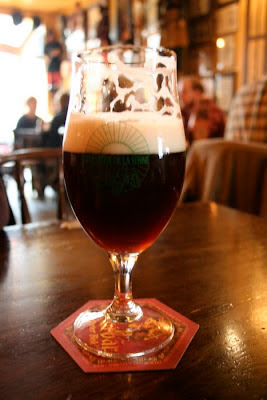 We are slowly getting closer to Christmas. Which in beer terms means stronger beers, Christmas beers, and generally more alcohol.

Over the next couple of posts you'll have the one or the other beer tried in no particular order in the regular Brussels beer bars, at tastings or visits to different breweries.

Here the Equinox. Brewed by the Brasserie de la Senne, it is a winter beer with heavy malt and chocolate taste. At 8% a solid winter beer.
Posted by Andreea at 12/04/2007 No comments: