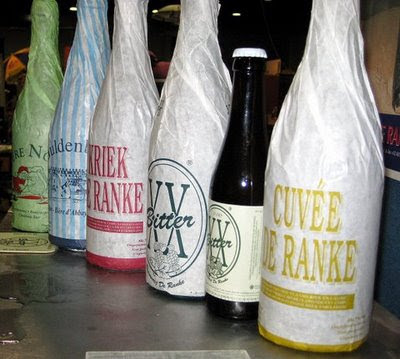 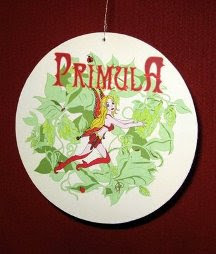 I am a nice person. Really, I am. Yet this is the second time around at Zythos that I had to say 'beurk'!
Primula. By the Brewery Lupiline. Coriander, citrus, hops, bitter, sweet: chaos. Or simply my palette is not made for this kind of herbal, spicy Belgian beers.
Sorry I don't like it. I wish I would as the Lupiline people seem like a nice (brewing) couple. And on top of this they also have to change the 'Primula' name now because of a complaint from Primus ... On the other hand I bet their Lupiline blond beer is very nice!
Posted by Andreea at 6/26/2008 No comments: 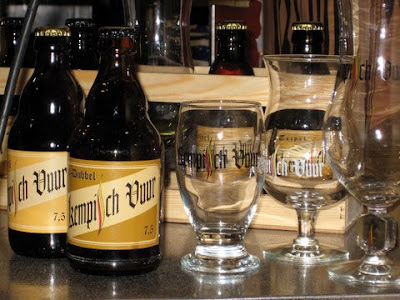 (We were on a short holiday break to Italy, no beer to speak of as we mainly concentrated on food and wine ... now back ...)
So, Kempisch Vuur. Steamy. The Pirlot Brewery brews three beers, of which we tried two at the Zythos Festival. The Kempisch Vuur Tripel 7.5% and the Kempisch Vuur 3-Dubbel 7.5%. The first is a pleasant 4 grain blonde beer, with a slight hoppy feel to it. The second is an amber beer with somewhat herbal/ spice taste.
Posted by Andreea at 6/26/2008 No comments: 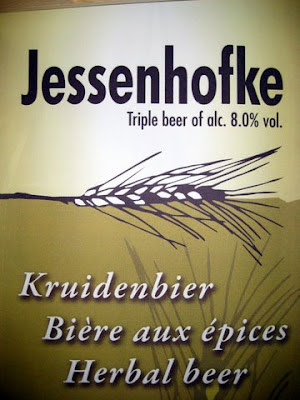 This beer is here only as a statement to the fact that there are also Belgian Beers I do not like. This being one. I was not sure if this was: beer or cough syrup? Probably one of the most herbal beers I ever had. Or will ever have. Brrr.
On the other hand their B&B looks lovely and you can brew your own beer ... so definitely worth a try. But this one? A miss.
Jessenhofke, 8% by Jessenhofke Brewery.

Update: Following this review, we were contacted by the producers of Jessenhofke. They invited us for a further tasting - respecting optimal beer tasting conditions.

However I find it admirable that a beer producer takes the time to read and consider a blog review. And consequently makes an effort to understand the tasters point of view.

What is your feeling on such approach by producers?

Keep an eye on the updated review (sometimes in July 2008). 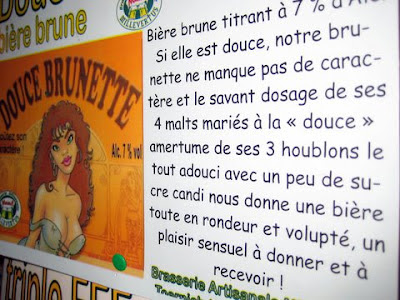 The description of the brewers says 'a round, voluptuous and sensual beer'. Go figure. The label alone probably says already too much! 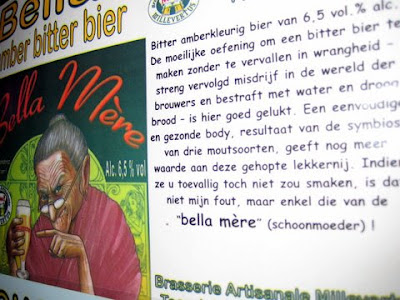 Still at the Brasserie Millevertus. The Bella Mere. A 6.5% amber, fairly bitter beer. A mix of 4 different malts and 3 different hops. An interesting beer but not my top favorite ones.
Posted by Andreea at 6/08/2008 No comments: After all the beer names and beer championships, it's back to the Belgian Beers. L'Amarante. A blond beer with exotic, peppery notes. At 7.5% this beer was a trial / new beer for the Brasserie Millevertus. Currently the brewery is trying to expand their range to more 'exotic' beers. Interesting.
Posted by Andreea at 6/08/2008 No comments:

I had to laugh at the following Euro Champs of beer. Brilliant!

Session 16 and a Beer Festival

Where did the time go? Really! Last time I took part in The Session it was way back in December. And now, here we are, already at The Session 16. This time around, The Session is hosted by Geistbear Brewing Blog and it is all about beer festivals.

Now of course I could tell you all about the Belgian Beer Festival(s). Or you could look up my Google Calendar and see what is coming up next. BUT. We just got back from a long weekend in Prague. And guess what? Without us even as much as trying we were there during the very first Czech Beer Festival. Talk about coincidence! 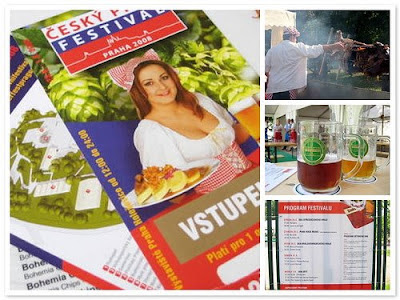 Ok, I know this post kind of goes against the whole 'Belgian Beer' blog idea, but bear with me. We did go to the Czech Beer Festival and we did have some beer. I do like beer, and I do like Pils. However I think somewhere in between this blog and our quest to try all the Belgian Beers out there our taste buds 'forgot' normal beers. All the beers we tried at the Czech Beer Festival were more or less ... the same! Very pleasant. Wonderfully refreshing for the heat we had. But really, kind of the same. Except a quite decent Budějovický Budvar dark (Budweiser dark).
I feel this is going to be a controversial post!
Now, the actual beer festival: more Oktoberfest than beer festival. Again, I can only compare to things I know. Such as a Zythos, or a Bruxellensis. Brewers, sharing their beer and the art of tasting. The Czech Beer Festival? Endless tables and benches and lots of massive beer mugs. Very Oktoberfest'ish. Confession? I am not a big fan of Oktoberfests.

And almost all the beers were served at all the stands. Which kind of (for me at least) made the whole beer festival/ discover brewers a little confusing. How come everyone was serving the same beer? Or did I get it all wrong.

Did we have fun? Of course we had fun. It was great to discover something a little different, and see the Czech Beer Festival at work. Then we made it all up for and went to the best ever beer pub in Prague. The Pivovarsky Klub. Absolutely fantastic!

Normal Belgian Beer blogging will resume tomorrow. Have a great weekend everyone.

Any others you'd like to add to the '10 Best Beer Names'? Soon I'll also try to launch a '10 Best Belgian Beers' where you can share your ultimate, favorite Belgian Beers. I see some have done so already.
Posted by Andreea at 6/06/2008 2 comments: