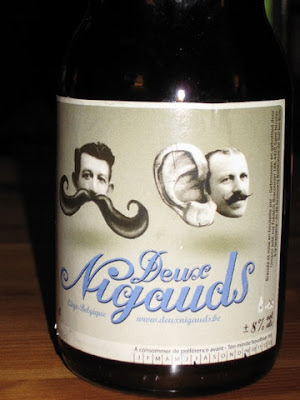 You will not believe this. But it is SO hot in Brussels at the moment, that drinking (Belgian!) beer is not really on our mind. Problem with the Belgian beer, besides being plenty of, is that it tends to be on the heavy side. Hops and alcohol don't mix well with the heat.
We haven’t been going out much trying new beers. Instead bought a decent stock of untried beer which we sip at ease at home. In the garden. Something I advise, if you don’t have the time to go to a specialized beer shop, try one of the local supermarkets. Not only do the big chains stock a very decent amount of beers, the local ones (outside Brussels) tend to also sell local beers … which we do not find in the Brussels’ supermarkets.
Our latest discovery in supermarkets selling beer is Cora, which has an impressive and unusual offer. We bought one of each and are now drinking our way through them. The first one up was the Deux Nigauds. A brown beer, brewed using two type of cereals and two type of hops. At 8% a fairly strong beer, which we enjoyed very much. Brewed by Brasserie de la Botteresse de Sur-les-Bois.
Posted by Andreea at 7/31/2008